Meggitt Controls formerly known as Whittaker Controls is the OEM engineering company for aerospace and gas turbine valves. You will find Meggitt energy products in GE LM series, Rolls Royce and many other aeroderivative gas turbines.

VBR Turbine Partners is the distributor for all new Meggitt Energy Products. At our location in Elst, VBR performs OEM & ATEX certified “back to zero hour” overhauls on Meggitt valves. 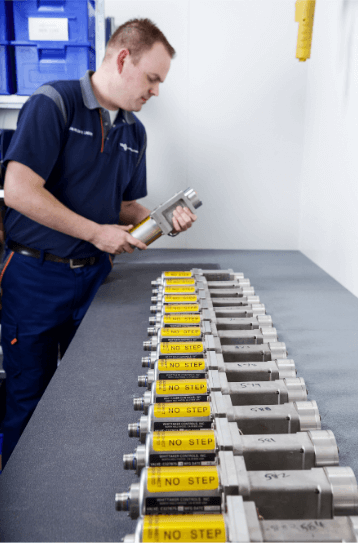 All Meggitt Controls valves are ATEX certified. VBR is the OEM authorized valve overhaul facility based in Europe. VBR provides overhauls on Meggitt valves that will bring them back to zero hour condition. When we deliver a full OEM authorized overhaul the required ATEX certification is still in place.

The OEM authorized overhaul facility for all Meggitt & PECC valves based in Europe is located within the VBR Turbine Partners main office and warehouse building in Elst, The Netherlands. Specialized engineers perform all required tests and overhaul procedures with all original parts to ensure that the ATEX certification of these valves remains valid.

Meggitt Controls is a well respected producer of gas turbine air flow control and fuel control valves. Many of these critical valves are used in General Electric (GE) and Rolls Royce (RR) aeroderivative gas turbines. Originally founded in 1942, Whittaker Controls has provided a wide range of innovative products for the aerospace industry and the industrial fluid control industry. In 1999 Whittaker Controls was acquired by the british aerospace engineering company Meggitt.

Meggitt Controls had a long and extensive experience with aircraft- and aeroderivative engine bleed air applications. They have also become a recognized authority on the development of robust air control valves for the harsh operating environments of industrial gas turbines.

The Precision Engine Controls Corporation (PECC) in San Diego was founded in 1968 as Bendix Energy Controls. Bendix changed its name in 1992 to PECC and became a leading manufacturer of fuel metering valves, bleed valves & actuators for gas turbine OEMs as Solar, Siemens & Rolls Royce. By the end of 2014 Precision became a member of Meggitt Controls Corporation based in North Hollywood. PECC valves are highly resistant to contamination as seen in harsh environments in the power generation and oil & gas industries.

Dear visitor, Welcome to the VBR news update June 2021. In this edition we kindly ask your attention for the new VBR gas turbine health check. This is a quick and thorough assessment of your GT operation to identify opportunities for O&M improvements and cost savings. We invite you to take a look at the […]
01 April 2021

Dear visitor, Moving into Spring 2021 the perspectives are finally becoming brighter … In this VBR news update we kindly ask your attention for the new DECIDE decision support website. It provides a wealth of information about effective gas turbine operation & maintenance management. We look forward to your visits and your feedback. Team VBR […]
03 February 2021

Dear visitor, 2020… What a year! The year 2021 will hopefully give us a more positive outlook. There are challenges for the first half of the year but we look forward to an improved outlook for the second half of the year. In this VBR news update we show you how we keep providing corona-proof […]
06 January 2021

Dear visitor The COVID-19 / Corona virus outbreak has a worldwide impact on people and on the way that our customers conduct their business and run their operation & maintenance. At VBR we keep providing outstanding maintenance support to you in the most effective & safe way for your employees and for our service engineers.The […]
23 July 2020

Are you in need of a Power Turbine for a LM2500+ SAC/DLE? We have one available (Lease / Buy) so please make sure to contact us for more information! Previous Next
19 March 2020

Important notification The COVID-19 / Corona virus outbreak has a worldwide impact on people and on the ways that companies can conduct their business and run their operations. Most of our customers are critical infrastructure companies that operate in electric power generation, city heating, oil & gas or industrial production. All recently imposed and upcoming […]
24 April 2019

Essential parts obsolete for Meggitt C173455 motor controller For many years Meggitt/Whittaker has provided a motor controller with part numbers C173455 and C173465 to drive her metering valves. Unfortunately essential replacement parts for this motor controller are no longer in production. Repair of your existing motor controllers will not be possible anymore by lack of […]
07 September 2018

“Safety First” VBR Turbine Partners prides itself in having an exemplary safety record. We have all national and international qualifications and certifications in place. This enables VBR to guarantee safe delivery of our high quality gas turbine maintenance solutions and maintenance services. Read more…